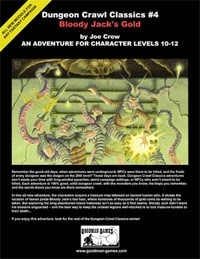 If you are planning on playing in this adventure STOP READING NOW! - You Have Been Warned.

Here is the first great parting of the ways between the DCC line and AD&D. It was inevitable that d20 adventures would draw more upon the options and alterations of third edition as the level of the adventures became higher.

My reviews are centered around the aspects of these modules that either need no conversion to AD&D or how they would relate to an AD&D adventure of equivalent level. I will not be focusing on them in terms of their third edition usefulness or playability.

The Otus cover art is fantastic. The scenario is filled with good ideas but the maps are a little sparse. I believe that the adventure itself is underpowered for twelfth level characters ( and this is something I see for either AD&D or 3rd edition).

I enjoy a good treasure hunt and I have always found pirates fun as a basis for adventure. Dead pirates especially so. The concept is intriguing. Even a successful expedition against the island and the treasure shouldn't keep it from being restocked to be used again. The plot is ripe for expansion but there is nothing to keep a DM from running it as is with few necessary conversions(though I recommend beefing it up in many ways if twelfth level characters are going to be used).

The map of the island and the monastery could not be simpler, and in that respect I find them extremely disappointing. The wandering monsters and set wilderness encounters, such as the fiendish sharks, are doomed. Any high level magic-user or druid has too many options for destroying or circumventing them just in their spellbook arsenal. What items or devices the players will also have at their disposal at the very start of this adventure should have no problem eliminating 8HD monsters with no magical abilities or ranged attacks. The problems with underwater combat are mentioned, but any experienced adventuring group going on an adventure in the middle of the ocean will be prepared.

It might be better to toss the players on the island as a shipwrecked group rather than give them a prepared base of operations. The scenario suggests that any ship will be manned by low level NPCs incapable of defending themselves against the more powerful monsters that can be thrown at them. While this may be true it would be something a prepared adventuring group would think of. Defending a base camp has always been a problem, but for characters this powerful would they even arrive by ship? The players are either going to have a secure base or be on their own and experienced players are going to know this. At twelfth level the PCs are going to have henchman, followers, companions, hirelings, if they are coming as a prepared expedition. This has always been the problem with high level games; the amount of resources available to the characters and the gaming experience that the players themselves have to call upon.

In this respect the adventure as-is doesn't offer much of a solution. The resources in terms of monsters the DM has to call upon as written are fairly inadequate. But it does offer up a number of possibilities for a DM to add to the scenario and even unsuccessful attacks against the PCs base or ship should be interesting to play and a drain and disruption on the treasure hunt. I'd recommend planning a series of attacks and events upon any ship or base camp that the PCs leave behind. Attacks in greater number, perhaps increasing over time, and planned events such as storms, sickness, ship sightings, than are mentioned in the adventure itself.

Now part of the plot includes an Imp spy who keeps a watch on the adventurers and seeks to tempt them to sell their souls in exchange for aid or perhaps survival. This seems so far fetched and unlikely, as well as creating an index-card exchange between DM and player, that I was sad to see it included. The party should be perfectly able to keep a watch for invisible creatures and the likelihood of any player being fooled into signing away their soul seems minuscule. For me I thought it was a bad idea and a waste of text, but perhaps other DMs can make use of it.

As I mentioned the island is undetailed. There is a suggestion in the text that the jungle is so dense as to be impassable except along an overgrown pathway. This is the green dungeon syndrome, where the forest is nothing but dungeon walls and the pathways and roads dungeon corridors. Wilderness adventuring tends to provide choices in a full 360 degrees as well as 3 dimensions. Railroading players down a set path in what should be an area of plentiful choices has never been a recipe for a fun adventure in my experience. But having an actual wilderness on the island will force the DM to create it themselves as it is not provided for in the module.

The adventure doesn't begin till page six. There is an overflow of superfluous information and background that really should have been devoted to the adventure itself. Greater detail and encounters on the island would have, I feel, been a much better use of ink and paper.

Finally the treasure hunt begins. This is a very combat oriented adventure rather than a tricks and traps scenario. For me the concept works very well. The adventure isn't about hidden treasure, though the players need to believe it is. It is about assembling a small army of undead. Unfortunately the types of undead encountered are far too low level for the recommended power levels of the party. A twelfth level cleric is going destroy any skeletons, zombies, wights and shadows lined up against them. Mages will use area effect spells from a distance on the same and a score of zombies or skeletons that are fireballed are simply going to so much charred rubble under the players' feet. How many 1 HD skeletons and 2 HD zombies would it take to kill a twelfth level fighter? I am not an expert in third edition but the bulk of the monsters in this adventure just don't seem up to the job.

But despite everything I have objected to I have to say that this is a good adventure. Converting it to AD&D should be no problem and either beefing up the encounters or lowering the recommended level of the module (while also lowering the level of some of the more powerful monsters) should be easy.

The heart of this adventure is very sound. The possibilities for expanding the adventure are many. As is, though, I believe it will too easy for a group of twelfth level characters.
Posted by Jason Zavoda at 10:35 AM