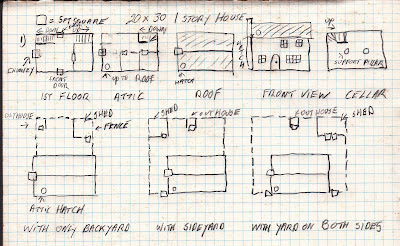 A common building often found in the:

It is less commonly found in the:

It is rarely found in the:

As with most homes found in the city:

The cellar is normally a dirt floor whose walls are constructed of stone slabs or boulders. Two wooden support beams help to hold up the wooden floor of the first level. This is typically used as a storage place for food (jars of preserved fruits and vegetables, meats, herbs, etc...), beverages, normally kegs or barrels of ale or beer, sometimes smaller barrels or bottles of stronger drink. These cellars are normally dank and musty, mice are common, but rats can be found (more likely to be encountered in the Beggar's Quarter, River Quarter, Hutsham, Slums, The Shacks & The Thieve's Quarter).

In some areas, most notably in Old City Quarters, as well as the High Quarter, Trade Areas and the River Quarter, these cellars will be floored with stone and access to the sewer system beneath the city is common through grates or metal-lidded passages.

Stone is easy to come by in the City of Greyhawk so most dwellings have either their first story walls constructed of stone, or of stone halfway up (three or four feet) and then wood.

Exterior doors are stout, often studded with iron nails or banded in bronze or iron in the Plaza D'Haut, Thieve's Quarter, River Quarter, Hutsham & The Shacks. These doors will often have a simple iron lock, and all will have staples and a bar ready to be dropped in place on the inside.

In the Beggar's Quarter and the Slums doors are commonly found broken or in disrepair. Most have a set of iron staples so that the door can be barred from the inside, but, for the most part, doors will have a simple wooden latch (in these quarters anything as valuable as a lock will most often have been pried or cut from an unprotected door.

In all other quarters exterior doors are stout, and capable of being barred from within but normally do not have locks.

First floor windows do not normally contain glass. In the Plaza D'Haut, Thieve's Quarter, River Quarter, Hutsham & The Shacks iron bars are often found. A double set of shutters is often in place, both capable of being bolted or barred from within.

In all other quarters first floor windows normally have a single set of shutters capable of being barred from within. In both the Beggar's Quarter and the Slums shutters are often missing or broken, with boards nailed into place over the empty window-frame.

First floor interiors normally consist of a single 10x15 bedroom. The rest of the first floor is a small area set around the fireplace with perhaps a cabinet for food, a stone sink, water-barrel, small table and chairs. There is a back door immediately across from the front in most dwelling with cellar stairs to onside and attic stairs to the other. Ceilings tend to be six to ten feet.

Second stories are wood construction. In areas where the first floor windows are barred, so too are attic windows. There will also be shutters, normally a single set capable of being barred, latched or bolted from within. Even in the Beggar's and Slum Quarters these shutters are often found intact.

The two upstairs rooms are often bedrooms, but sometime used for storage. A trapdoor and ladder allow access to the roof and the area around the chimney stack often has a table or work-bench.

The roof is wooden with curved brickwork tiles. A gutter runs along the edges front and back. In the Beggar's Quarter and the Slums these roof tiles are often missing and the roof sagging or warped.

The back of most homes has an outhouse with a honey-pot and a shed containing gardening equipment (most tools of any value are kept indoors). The fence is most frequently made of wooden boards.

Most Greyhawkers grow food in their small plots of land. Larger areas will likely have a few hens and henhouse, goats or a pig or two.

At each corner of the house a gutter runs down to a water-barrel. Plumbing or wells are rarely, if ever, found in these dwellings.

These homes are inhabited, for the most part, by small families of two parents, three to five children and a grandparent or great uncle/aunt. These are dwellings of peasants and commoners who have some form of employment.

In Hutsham and The Shacks these dwellings are often in good repair and occupied by the more well-to-do of the down-and-out of Greyhawk. They are sometimes used as guardposts, or homes of overseers and minor bosses.

There are likely to be found 2-5 1st Level Fighters or Thieves with a 2nd level Fighter or Thief in charge.

Walls surrounding these dwellings in Hutsham and The Shacks will be 8 to 10 feet high of stone with broken glass or spikes on top, or tree-boles with spiked tops. A door or gate in the back fence is likely. Yards may contain a shack or shed with 2-4 0-level servants living within.
Posted by Jason Zavoda at 5:25 PM 2 comments: 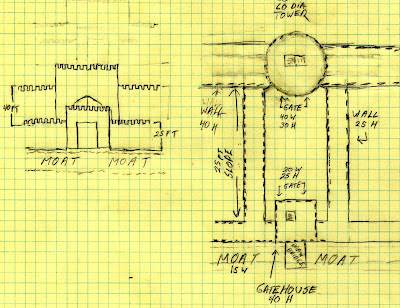 Sorry for the rough map, but I'm terrible at drawing.

This seems to match the City of Greyhawk outer wall description from the City of Hawks novel.

"A double wall encircled the city. All of Greyhawk - Old City, the larger area called New Town and the Citadel too were within it. The outer curtain was some twenty-five feet high. This wall splayed out at the base where it met a ditch, or moat, or some other watercourse, and was topped with serried merlons and crenels to protect defenders in time of war.

Between the outer and inner walls was a relatively level sward a hundred or more feet broad. The outside edge of this strip of grass was level with the battlements that topped the outer wall. The crowning stone of the inner wall was much higher. The city had been built on a large hill - not especially high, but large in area. Those on the sward between the walls could look upward forty feet to where machicolated battlements stood topping the massively thick curtains of the inner wall. At intervals there were bastions on the outer wall, and matching them on the inside were tall towers.

Wherevere the walls were pierced by gates, the sward was broken. Every way that led into the city resembled a road at the bottom of a canyon. Travelers from the outside would pass through a gatehouse first, then a long passage, open above, but flanked by walls on either hand; then a tunnel that bored through another, bigger tower."

I've seen the fan drawn map of the City of Hawks and the map published in LGJ#2. Both are excellent and well beyond my own cartographic skills, but while the first is much more faithful to the map from City of Hawks I dislike the squareness of the streets and districts. I also haven't compared the scale of this map with the scale from the book. The Greyhawk of City of Hawks is vast. About six miles wide by nine mile long within the walls.

The latter, Maldin's map is about one third of this size. It is also not faithful to the City of Hawks maps in a number of ways. The exterior rivers are missing, the Bastion outside the walls is missing, the Citadel and many districts have been moved. The interior wall seperating the Old City and smaller wall seperating the Foreign Quarter, etc...

One of the things I want in a Gygaxian City of Greyhawk is the ability to connect the streets and place various inns, taverns and other buildings as described in the novels. While this may be possible in the fan created version I just don't feel that the shape or size of the city is captured to my liking.

This is a very crude depiction of the outer wall. I intend to crudely draw out the various streets and buildings as well as add detail of interiors while trying to keep them faithful to the available information provided for the city.
Posted by Jason Zavoda at 12:16 PM 6 comments: 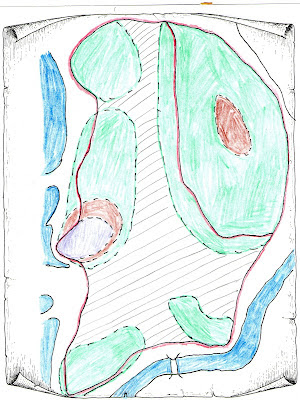 Please forgive the grade-school style of my work, but I've never been a dab hand at drawing or cartography.

This map is based on the map found in Gygax's City of Hawk's novel.

The Purple is the highest elebation with each elevation depicting around a 50 foot tise, then red, green, and uncolored. The Blue represents the Selintan River. The red lines represents the city walls.

I placed the Citadel at the highest elevation. High, Garden and River quarters I envisioned as hills that had been shaped and plateaued. The University and Clerkberg areas as well. The Old City I saw as a two step plateau with a higher elevation in the center with one end containg the old city barracks, now the prison workhouse.

For the most part I have seen the City of Greyhawk depicted as flat, but in City of Hawks it mentions that, "The rambling walls follow the entire complex of ridges and hills that rolled from the northern tip of Old City to where the Grey Run and the Selintan flowed together."

The colored splotches shown on this map are a very rough estimate. Within each area I see winding streets, some clif-like areas while others rise slowly to higher areas. Some areas may have a more ridged or sculpted appearances, while many of the streets and buildings may tilt at angles in a ramshackle and shoddy construction.
Posted by Jason Zavoda at 11:50 AM 4 comments: