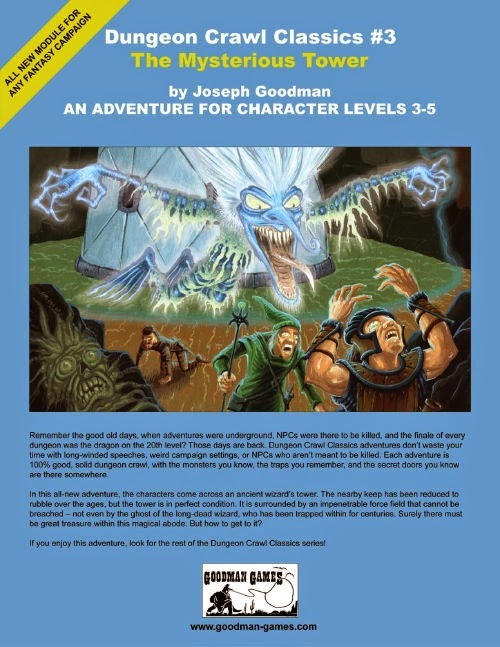 If you are planning on playing in this adventure, STOP READING NOW! - Spoilers - like there is no Santa or Angelina Jolie is really a man - I told you to stop reading


What a fantastic piece of cover art by Erol Otus... I should stop writing now....

The best thing about this module is the cover. This isn't a terrible adventure just a ho-hum bit of monster killing that makes little sense. A kind of low level poor man's Tomb of Horrors like one of those state fair miniature portable roller coasters but without the strung-out ex-cons at the controls, and with less rust and beer cans.

The premise of the module is painful. A wizard puts the magical on/off switch for his tower's permanent wall of force just a few inches outside his tower while he is inside his tower turning it on for the first time. Trapped inside he goes insane, dies and becomes that wickedly cool looking Otus-drawn ghost on the cover but doesn't really have much of a part in the bulk of the adventure. What a waste.

Getting to the on/off switch is the main focus of the module. The ground level portion is a brief scare by the ghost and the extermination of some vermin, literally. Absolutely nothing surprising or challenging and the greatest danger seems to be falling into a sinkhole. The exterior map is plain and uninspired.

The first level below ground has a small but interesting map. The encounters are split between a nest of owlbears with a dab of pathos and a small tomb with a bit of silliness and one of the most annoying undead, a wight. I hate level draining. This is an important level and depending on how obvious or easy the DM wants to make it the players will need to do some searching here. That shouldn't be a big problem, only, perhaps, time consuming. Again; the challenges on this level are minimal.

The next level down is very short. Three numbered areas, large spaces, but really just one combat encounter after another. It should be possible for a thinking party to defeat each monster easily or a non-thinking party to fight their way through.

The third level down is the tricks and traps section. To me these traps seemed uninspired and easily circumvented. An incautious and inexperienced group of players could get themselves killed but it would be like drowning in a bathtub and after the first time it is unlikely that the players would let it happen again, and again. A little caution if not experience with traps will get the players through this area, and that is basically that.

The tower itself is pretty much reward without many risks and an "all martians are liars" type of puzzle.

All in all I found this adventure to be low on challenge but one that can easily be tossed into the middle, start or end of a campaign. A one-shot scenario that could be spiced up with some effort by the DM or played as written. The Otus cover immediately made me think 'classic' and the module itself made me think 'forgettable'. Very handy for a pick-up game or a filler for a rushed DM.
Posted by Jason Zavoda at 9:51 PM