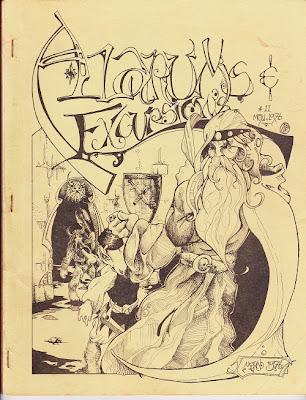 You have outfitted your expedition for the dungeons of Greyhead Tower, but as you wander down the town streets toward the tavern where you are to meet your companions-in-arms, your mind is troubled. There's no denying it, the expedition is unbalanced. There's an elf, a husky dwarf and a hobbit, two first level magic-users, a couple of useless young clerics from the nearby monastery who need to go up a level before they can even heal wounds, and a ubiquitous thief or two. The group needs brawn. Greyhead Tower is no easy challenge for a bunch of first levelers, you'd feel a lot safer with a few fighting men along. Advertising is also chancy and may net you nothing for your trouble.

The banner in front of a building across the street catches your eye. "Expeditions Unlimited: Hire a Warrior!" Oh, well. You've got nothing to lose, you cross the dirt road and enter the store front. The place looks like, and is, an armory, with odd bits of mail and weaponry lying about waiting to be repaired. Out back is an open yard, flooded with sunshine. You can hear shouts, laughter and the clang of steel on steel.

"Some of my boys training," says the big heavy set fellow behind the counter. He has a patch over one eye and is missing several fingers of his left hand. He smiles heartily. "Ajax's my name. May I help you sir? Looking for husky fighting men for a dangerous and secretive mission perhaps? All my lads are guaranteed lawful and 15 plus strong. I don't take 'em if they're weak. Tryouts for the locals and the hopefuls every month. Them as can't bend and iron bar, lift 500 pounds and slam a sword blade through a three inch oak plank I sends away. 'Keep in training and try again, I tells 'em' The others I train myself -- weaponry, hand to hand, monster slaying and the like -- veteran of the dungeons myself, I am."

"Terms? Simple, sir, simple. Full shares in any treasure, 'stead of your usual hireling half shares. Convenience to you, saves time, and the company guarantees each of out lads. Well trained, first levelers, each one, full equipped. Chain mail, helmet, shield, sword. The wide bladed falchion is popular hereabouts. What do you say, sir?"

How can you lose on a deal like that? In practice, what I do is roll 3 six sided dice until I get a 15 or better. These are Ajax's tryouts -- those who don't measure up are turned away. Once a strength 15 to 18 is rolled, then I roll the rest of the character's traits in the usual way, adjusting his strength if possible. Ajax usually has a stable of six trained fighters. Originally they were all from the local area, youths seeking fortune and adventure. Recently there has been an influx of Viking barbarians, big blonde fighters from the north. Casualties run high, rarely does a fighter reach second level, since he accumulates experience points at half rate.

Ajax pushes his battered face close to yours. His breath smells of cheap wine. "How about it, sir? a couple of husky stout hearted lads, now? Just the thing to beef up your group." Give it a try.

Holmes -- Your terms are somewhat stingy. The Fighters are presumably still getting half a share (and turning the other half over to the entrepreneur running the rental agency). My hirelings normally ask for a full share in the treasure plus their pick of the magic or an extra half-share in the treasure if no suitable magic turns up. They usually get it too.

Warrior For Hire (Eric Holmes): That's the way I always imagine the Slayer's Guild to operate. Wouldn't there be some sort of payment to be made to the guild if a hired fighter was not returned in one living piece -- insurance, sort of?

ERIC HOLMES - You seem to have forgotten Ajax's cut.

Eric Holmes :Normal shares PLUS 500 gp a man. Warriors are not that easy to come by, 'specially ones with 15+ strength.

Eric Holmes Good idea. Already incorporated. In fact, you can hire a whole mercenary if you got the gold in TS.

Eric Holmes: Why does everyone thing First Level Clerics are useless? (Including the Clerics themselves, pretty often.) They can swing a flail or mace and sling alongside the best First Level fighters, and in addition they can turn occasional Undead. I suppose that if your Dungeon limits them to leather -- as I hear some do -- then they need as much protection as am M-U, but otherwise... you ought to meet Lucy Clems daughter and her war hammer Borisbane some day. 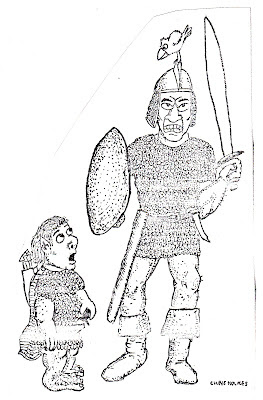