Gygax's Letter from Alarums and Excursions #8 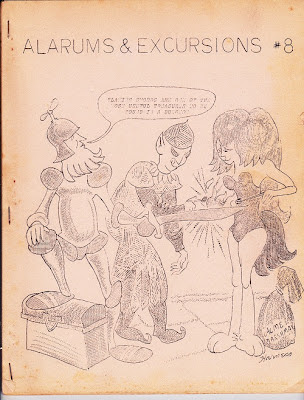 There was an interesting comment in the October ish which I cannot allow to pass unchallenged. This veritable pearl of wisdom dropped from the learned lips of one "Barry." [Well, not really. It actually occurs in PERCEPTION 2, pages one and two written by Dick Eney. It is addressed to Barry who had condemned "xeroxing D&D rules instead of paying for them" in an earlier issue. Future allusions to "Barry" will be changed to "Eney" by the typist. -- LG.]

Now in all fairness, I must preface my remarks with the admission that I once said something very like what this good fellow did with regard to "pirating" of miniature figures. Jack Scruby wrote a rebuttal which made me look a tad foolish and set the matter straight. So now the shoe is really on the other foot and it pinches a trifle.

Leaving aside the question of legality -- and it is illegal to copy works held under copyright, of course -- I must set you all straight about costs. The production of a game or rules set entails very many expenses beyond the base printing cost, and I must say that the printing cost of D&D runs quite a bit above the six bits that Eney mistakenly asserts is the cost. (If, in fact, he can have the three booklets printed, the separate charts also done, and assembled, the box made and wrapped, and the whole put together and shrink-wrapped for that price, he should contact me immediately and let me know the name of the printer!) However initial printing cost is not the only consideration. First, a substantial sum of money must be raised in order to pay for from 3,000 to 5,000 copies of the print run, and a place to house all these sets must be found. Then material to handle orders, wrap them and ship them must be arranged for, as well as someone to do the actual work. Records must be kept. Taxes must be paid. Royalties must be reported and paid to authors and artists. Salaries must be paid. Overhead must be paid. And there is always the good old discount! We offer them, hobby stores get them (and most folks would rather go and pick their materials up immediately than wait for a mail order), and distributors get very substantial ones. They're all necessary and beneficial -- except that in some cases the authors make more money on a run than TSR does! That's fine as long as the overhead and fixed expenses get taken care of, but it doesn't consider what is to be done for new productions.

As A&E has not hesitated to point out, TSR deserves to gain some profit for its venture. Frankly, we do not think anybody else would have been willing to hazard what we did in pioneering the fantasy game field. In this same vein, we have many other new designs which we wish to publish, but each entails a considerable amount of time, effort and capital. TSR employees all receive minimal wages in order that the firm will have enough excess to produce new material. To correct the learned Eney, D&D, GREYHAWK, CHAINMAIL et al., most certainly are bread and butter to five or six TSR employees (including myself, my wife and our five children). They are also the bread and butter of those who look forward to new material from TSR.

This whole matter irritates me more than a little when I think of the time and effort I have put into it for the past few years, the work all of the TSR people have put in with an average remuneration of something less than two dollars per hour, while some nit babbles about matters he has absolutely no conception of! (As I was careful to preface this whole thing with the admission that I once did the same with regard to the costs of miniature figures, I trust no personal offense will be taken.)

Again, Eney seemingly shells out a buck for A&E without qualm or complaint because it contains something he enjoys greatly. Doesn't D&D deserve the same regard? I think so. It is illegal to copy D&D. It is unethical. And in the final analysis, it might mean real loss to great numbers of people. That isn't to say that there is the least objection to copying parts of the books for your own use or for that matter if some individual is too damn poor to afford the cost of his own copy of D&D, it is better he get a Xerox than not be able to play. But how many copies are simply made so as to profit the fellow illegally duplicating his D&D? Or how many are made in order to save the money, so as to use it for some other form of entertainment? It all boils down to the question about whether or not the laborer is worthy of his hire. Evidently Eney does not think so. I appreciate A&E's stand with regard to this matter and letter is written primarily to vindicate it, for I doubt it will turn those with a dishonest bent from whatever course they choose.


From Alarums & Excursions #1 by Barry Gold

Lee and I, as publishers of Alarums and Excursions, recommend that you buy the rules to Dungeons and Dragons if you don't already have them. Xeroxing somebody else's copy is unethical and illegal too. If you are going to get involved enough in the game to build your dungeon, you should at least spring for $10 for the rule books. If you aren't making your own dungeons, you don't really need the books - some other player can tell you how to make and play a character. So there is no excuse for making a bootleg copy and depriving Gary Gygax, the game's inventor, of his fair share.

BARRY: There are mutterings of Discontent over your comment anent(Sp?) depriving Gygax of his fair share by xeroxing Dungeons and Dragons and, by extension, Greyhawk and Chainmail. as I believe that I (hem hem) am unlikely to be tagged as one of the irresponsible hippie types trying to tear down the fabric of our Free Enterprise system, maybe I'd be the right one to state them.

Firstest, let us Define Our Terms. D&D, Greyhawk, and Chainmail are fanzines (and there are more than a few Fanzines with better artwork and proofreading). That is, they are something that is published in connection with Gygax's hobby and for fellow hobbyists; they are not his bread and butter and so we don't have to make a baseline calculation of what brings him in a decent annual salary, as we would with a fulltime professional. On the other hand, we do have to him justice and make sure that a work which has brought us so much pleasure doesn't wind up costing him something out of pocket. All X so far?

Now let's make a cost guestimate. Volume I is 36 pages and a heavy cover, II is 40 pages and a heavy cover, and III is 36 pages and a heavy cover. Pages are four to a quarto sheet, so there are 18 standard-size sheets and three heavy covers. Let's assume something I don't really believe for a moment: that he hadn't the information to shop around for a price break or quantity discount, and paid the prices for commercial instant-print lithography, i.e. got badly ripped off. Nevertheless, even paying premium rates like that, 1000 sets of D&D -- that is, of all three booklets together -- should have cost him about $733.80. If he printed 2000 at once it would have been nearer $1268.80 (or $624.40 per thousand). Greyhawk, similarly, should have stood him $341.20 per thousand; if he got 2000, then $583.00 total (or $291.50 per thousand). Any of you can check this with your friendly neighborhood instant-print lithographer, so I won't bother with the calculations here. I did run it past George Scithers, who gets similar-size print runs for AMRA; he gets distinctly better prices for the whole operation including commercial stapling, even though AMRA uses odd-size special-order paper, runs half-tines, and is far superior in quality of repro to D&D.

Personally, I paid the full list price for Dungeons and Dragons and Greyhawk both, just as I did for other stuff like Warriors of Mars and intend to do for War of Wizards and Empire of the Petal throne and probably more. Presumably many of the rest of us did or would do the same, as a point of honor. But when somebody charges me $10 for an item that should have cost him less than 75c, that's a markup of well over a thousand percent (unless I punched the wrong buttons, it comes to 1264% for D&D and 1366% for Greyhawk. all in all, I am not about to dump on Xerox fandom on the grounds that Gygax is being screwed every time that green light flashes.

Dick Eney: I find your calculation of Gary Gygax's profit frightening. You have overlooked a couple of factors, though. First, the box probably costs quite a bit (no; about 15c retail -- R.E. [Dick Eney]), and its label costs something too. Second, and more important, I bought my copy from a friend, a (fan) dealer, who was able to give me a discount. This means that, whatever Gygax gets for this set, it is not always the full $10. When there are all those overhead costs, including postage on his mail orders...

As a (partial) beneficiary of Xerox, I am glad to think, however, that he does make quite a bit more profit than seems reasonable, even if not the 1264% you calculated. (Let it be noted that I bought D&D and GREYHAWK, and would not have had the money to buy a new set to replace my lost V.I of D&D.) [I've never seen any offer of single volumes; does anyone know if they are replaceable other than by this sort of bootlegging? -- R.E. aka Dick Eney]
Posted by Jason Zavoda at 8:15 PM