Clark Ashton Smith - Some Ideas and Descriptions from his Stories 5a 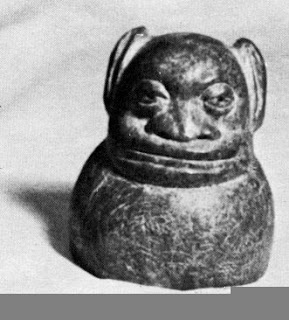 Clark Ashton Smith - Some Ideas and Descriptions from his Stories 5a

SPOILER WARNING!
If you have not read this story TURN BACK NOW! or risk losing forever the unspoiled appreciation of Clark Ashton Smith's prose.

"I, Satampra Zeiros of Uzuldarium shall write with my left hand, since I have no longer any other, the tale of everything that befell Tirouv Ompallios and myself in the shrine of the god... (see post 5b), which lies neglected by the worship of man in the jungle-taken suburbs of Commoriom, that long-deserted capital of the Hyperborean rulers. I shall write it with the violet juice of the suvana-palm, which turns to a blood-red rubric with the passage of years, on a strong vellum that is made from the skin of the mastodon, as a warning to all good thieves and adventurers who may hear some lying legend of the lost treasure of Commoriom and be tempted thereby."

"Now Commoriom, as all the world knows, was deserted many hundred years ago because of the prophecy of the White Sybil of Polarion, who foretold an undescribed and abominable doom for all mortal beings who should dare to tarry within its environs. Some say that this doom was a pestilence that would have come from the northern waste by the paths of the jungle tribes; others, that it was a form of madness; at any rate, no one, neither king nor priest nor merchant nor laborer nor thief, remained in Commorion to abide its arrival, but all departed in a single migration to found at a distance of a day's journey the new capital, Uzuldaroum. And strange tales are told, of horrors and terrors not to be faced or overcome by man, that haunt forevermore the shrines and mausoleums and palaces of Commoriom. And still it stands, a luster of marble, a magnificence of granite, all a-throng with spires and cupolas and obelisks that the mighty trees of the jungle have not yet overtowered, in a fertile inland valley of Hyperborea. And men say that in its unbroken vaults there lies entire and undespoiled as of yore the rich treasure of olden monarchs; that the high-built tombs retain the gems and electrum that were buried with their mummies; that the fanes have still their golden altar-vessels and furnishings, the idols their precious stones in war and mouth and nostril and naval."

"...we saw in the moonlight the gleam of marble cupolas above the tree-tops, and then between the boughs and boles the wan pillars of shadowy porticoes. A few more steps, and we trod upon the paven streets that ran transversely from the high-road we were following, into the tall, luxuriant woods on either side, where the fronds of mammoth palm-ferns overtopped the roofs of ancient houses.

We paused, and again the silence of an elder desolation claimed our lips. For the houses were white and still as sepulchers, and the deep shadows that lay around and upon them were chill and sinister and mysterious as the very shadow of death. It seemed that the sun could not have shone for ages in this place- that nothing warmer than the spectral beams of the cadaverous moon had touched the marble and granite ever since that universal migration prompted by the prophecy of the White Sybil of Polarion.

"I wish it were daylight," murmured Tirouv Ompallios. Hos low tomes were oddly sibilant, were unnaturally audible in the dead stillness."

The city of Vol in the Amedio Jungle is dead but for the bestial life of the ape-man. While some parts of the city have been rebuilt by a few thousand of these strangely human-like and advanced creatures, most of the city remains locked in jungle-choked ruin. The oldest and more outlying areas of Vol are home to a more savage breed of ape-man as well as the beasts of the wild, the giant-sloth, clouds of giant bats, the sabre-tooth...

In the comfort of the old inn at Monmurg, the Silver Eel, Satampra Zeiros the One-Handed, tells of the great treasures to be found in a nameless and forgotten temple located in the abandoned suburbs of Vol, and of the map he is willing to sell for a substantial amount of gold, and a share in the treasure itself.

While Satampra's map is accurate, if slightly out of date, the treasures he speaks of, the eyes of the dark idol in the abandoned temple (rubies as big as northman's shields) and the collected offerings of millenia piled at the idol's feet, are not simply there for the taking. The temple is not abandoned, and the dark idol is not nameless. The wild ape-men of Kor, driven from the rebuilt center of the city by their more evolved cousins, have opened the doors to this ancient, squat stone temple and have found a god.

The passage to Vol, according to Satampra's map, is down the river from the Amedio Coast and onto a small tributary that ends at a collection of broken stone piers near the east of the city at the edge of the old suburbs. This basin is home to a water snake of gigantic proportions. Vasha, her ancestors altered by the power of ancient mages of Vol, is a stupendous creatures several times the size (and hit dice) of a normal water snake. She is of moderate intelligence but high cunning. She will not risk herself unless she is sure of success, though she is willing to sacrifice her progeny (what else are children for?) in great numbers. These water snakes are double the size and hit dice of normal water snakes and infest the half-submerged ruins immediately surrounding the pier.

Vasha lairs in a cavern beneath the basin. It was several passages and chambers (including a hidden chamber where the research was done on her ancient kin). Her nest has an escape tunnel that leads to the T'vala inlet which she will not hesitate to use. Vasha is a big coward at heart. Vasha is immune to charm spells and abilities and her children are highly resistant.

The overgrown houses, shops, barracks and boulevards have abundant animal life. Exploration of these ruined buildings will result in numerous encounters with wild animals defending their lairs. As with Vasha's children these animals are highly resistant to charm spells and abilities, but they are no more aggressive than any other wild beasts of the Amedio Jungle (at least for now).

If the players have Satampra's map it will show a path through the jungle and ruins that leads through, what one were, major streets of the outer city. These paths lead to a clearing. These paths are suspiciously clear and show signs of recent passage. 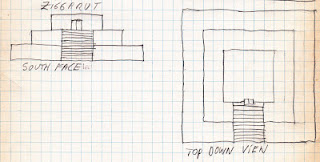 The clearing, at the end of a short three mile journey through the ruins, is a paved square with an old and worn squat black building made of basalt blocks. It is a short, three-tiered, ziggurat with a set of stairs leading directly to a pair of double doors at its top level. There are at least fifty bodies scattered about the square. Two of the largest clumps of the dead, comprising about a dozen bodies each, are charred and smoking. The others appear to be chopped, battered and broken. Other than a few exceptions the dead are ape-men, some clad in dark mangy capes (giant-bat skin).

The first non-ape-man body appears to be a youth, fair-haired, the hands of an ape-man with a split-skull clutching his legs and the headless body of a second ape-man nearby. The youth has had his throat torn out. On his back is a large open pack which still contains food and some camping gear. He has an ordinary belt knife and clutches and unbloodied spear.

The second human body can be found at the foot of the ziggurat, a fruz warrior. There are a half-dozen ape-man bodies around him, slain, apparently, by a large axe clutched in his right hand. A close examination of his body shows that his arms and legs are swollen and tinged with green. He wears an enchanted shirt of chainmail and his axe is also magical and runecarved.

There are no other visible entrances to the ziggurat other than the double-doors at the top of the stairs (although 2 secret and hidden passages are among the ruined buildings bordering the square). The long flight of stairs up to the doors is festooned with ape-man dead with a large pile of bodies before the doors. These bodies will need to be cleared before any attempt can be made to open the doors. As the players reach to drag away the last body an automaton of flesh springs up, tossing aside the corpse of the ape-man. It is only slightly damaged and will attack anyone approaching the door or directing ranged attacks against it.

The doors are shut with iron spikes and a crossbar from within. It will take 449 hp damage to batter them down. As the first blow against them falls (or if they are opened by any means) drums from the surrounding ruins begin to sound.