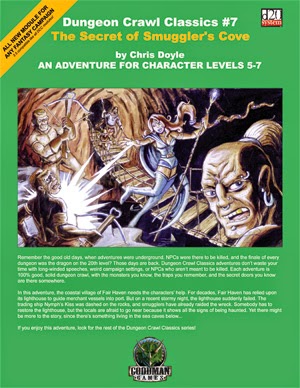 This adventure seems like an homage to the old AD&D U1-3 Saltmarsh series, though I don't see that mentioned. Many of the basic plot elements are the same but if I had to choose between the two I'd probably pick this adventure. The saltmarsh series were introductory and low level adventures while DCC#7 starts off at mid-range experience level for the PCs allowing more diverse and powerful challenges.

The module provides a map and background material for the town where the PCs will be based, sufficient if slightly uninspired plot hooks to bring the characters into the adventure and an interesting background for the dungeon, its previous and current occupants.

As with the U series the first area to be explored is fairly vacant and not meant as a serious challenge to the party. Unfortunately several of the early encounters threaten to reveal the entire secret of this adventure, far too soon in my opinion. It is entirely possible for the players to explore the lighthouse, the manor, and the 1st dungeon level beneath without discovering the caves housing the smugglers or their allies.

It would be a shame to reveal the entire secret too soon since the scenario is filled with possibilities for misdirection. Despite the name of the adventure the townspeople are unaware of the smugglers presence or the danger they face from the aquatic tribe nearby. The tower is merely haunted, the manor house abandoned and become the abode of vermin and monsters and the evil temple beneath it unsuspected. My feeling is that the smugglers should be hinted at rather than revealed and the locathah left as a surprise till they are encountered. This requires several alterations in the written encounters.

1. The ghost of the lighthouse keeper would, I feel, be much better served as a clue or even potential ally, rather than a difficult combat encounter. If he had died not knowing who killed him but seeking some item of his that the smugglers might have looted then he could appear again at a convenient time, distracting an enemy, providing guidance or even atmosphere to the adventure. He is likely to be destroyed without revealing any information, or if the ability to question him exists, he is even more likely to reveal too much, too soon.

2. Inside the manor the PCs will encounter a small group of gnolls. Here is a danger of revealing all to the players. The smugglers, the locathah and the plans of the locathah unknown even to the smugglers. I also question why written contracts would exist between gnolls and locathah. The concept seems out of place in any fantasy world. Instead I would have the gnolls kept in the dark completely about the locathah and some type of misdirection applied. Invited by an evil mage or cleric, or a bandit gang, anything to keep the players from suspecting smugglers.

3. The harpy. As with the gnolls the harpy would be of better use to the smugglers as a cover for their own activities. She may know or suspect more, that they use the dungeons beneath the manor, but why reveal to her that they are smugglers. The players may begin to suspect that the secret of smugglers cove is that there are no smugglers only bandits or an evil cult instead.

4. Below the manor the 1st level of the dungeon is mostly abandoned. The temple itself is still defended but for the most part there is little to encounter. What fails to make sense to me are the prison cells. The players cannot help but find them if they explore the manor and the prisoners know far too much to be left so exposed to a casual search by the strong party of adventurers. Why would prisoners be kept at this dungeon level and not deeper within the smugglers cave? The bard is needed for the smugglers to make use of the lighthouse and he is aware of much of what has been going on. My suggestion is to remove the bard and place a smuggler as a captive, perhaps more than one. The smuggler could pose as a traveling merchant or mercenary guard who tells a story of bandits or evil cultists. The local farmer could also have been lead to believe this tale and set the players off against a tribe of gnolls or scouring the nearby roads or wilderness for bandits, perhaps with the smuggler volunteering to accompany them as a henchman or a guide, or offering a reward for valuable merchandise taken. The ogre more appropriate as an unwitting hireling openly guarding the prisoners and another smuggler guarding the secret entranceway. One that would not run out and reveal the passage down to the smugglers hideout.

My feeling is that adventure would be better by trying to set the players on the wrong path rather than revealing so many secrets at the start.

All in all an excellent adventure. Adding some misdirection for the players could make this into a small campaign while the adventure itself should provide more than one session of gaming with several areas to explore and challenging encounters. It should be an easy conversion to AD&D.
Posted by Jason Zavoda at 8:22 PM