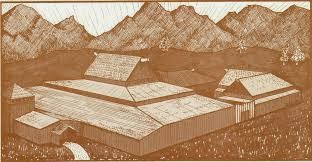 The dim light was swallowed by the dark. The color faded first, the red blood on his hand went pale then the black came over the edges of his sight like an island sinking beneath the waves. Harold felt a sudden weakness, the world began to swim; he remembered standing on a ship as it approached a harbor in a storm. The world rolled and shifted all around him and then the light was gone, as if a lone candle had been snuffed out. The world returned first with sound,

"...ainted. I think." a voice spoke above him; then he felt a bitter metal taste on his tongue. His mouth was dry, and filled with clotted blood, gummy and foul. Harold shifted, coughed and hacked till his throat was clear and strained, then croaked out a few words.

"What happened? What hit me?" he asked, but the words came out rough and garbled.

"I think you fainted," said Telenstil.

"You should have bound those wounds," chided Talberth.

Harold groaned and sat up on his elbows, he looked like a corpse animated by some foul priest or necromancer, rising from the dead.

"With his arms and legs tied?" Talberth did not care for the scout but he cared even less for the orcs. His voice carried with it the derision he felt for both them and their lies.

"I believe them," the ranger came to the orcs' defense. "Back at the steading Derue used his hands and feet like I use a sword and bow, if he had not been bound I think he would have killed them all."

"Yea, he fight first," Boss insisted, "we just stomp him. He kick me, kick them too." the orc gestured to his three followers with a nod of his head. "Not carry him anymore." the orc said firmly.

"He can't be carried anymore," Gytha said. "Not trussed up like the carcass of a deer. The ropes will cripple him, he has a powerful spirit to have survived this long and be able to fight. I will have to try to heal him. I will need to prepare myself; there is an evil within him."

The young cleric looked even more exhausted to Telenstil since he'd climbed down to the stone passage. She'd insisted on helping Ghibelline descend and she'd nearly collapsed in the same way as the halfing had just done when she reached the cracked tile floor.

"Will that evil sustain him?" asked Talberth.

"Let him be, it seems that he is still strong enough."

"That evil will consume him, it will use him alive or dead," said Gytha. "I would not consign a foe to such a fate, and Derue was not our foe."

Telenstil's voice surprised them, normally calm and friendly, his one word sounded bitter and filled with hate.

"This evil has claimed a third of us, Henri, Edouard, Derue, I think that none of us felt friendship for them, but they fought beside us, they were our companions. The three who were the most estranged, they fall to this evil first, that is the nature of what we have come to fight against. This evil force is insidious; it is a curse which draws out the worst aspects of ourselves. We shared some harsh words with Derue, but that was all, he is one of ours, not one with those we fight."

"Telenstil, I have had to give the mercy stroke to friend and comrade when they have lain wounded and could not be saved," said Harald. "Sometimes that release is the only way. If we cannot save Derue from this evil and cannot leave him and cannot take him with us, then we must end his suffering, I would have you do the same for me."

"Death will not release him from this evil," said Gytha, her voice sounded far away. "Death will only bind him further to the evil that has touched him. While he lives there is hope, if he dies that hope will almost disappear."

"We have few choices it seems," Harald looked down sadly at the body of Derue.

"Yes, we will choose," said Telenstil.

"If we do not, time will choose for us," Ivo added.

"I will pray for healing," Gytha said firmly. "I will try to drive the evil from him. The Saint will lend me his strength."

"Gytha, you should rest before you try this," Telenstil said gently, his brief spell of anger had passed.

"He needs to be healed."

She could hear the rattle of Derue's breath, shallow and unsteady.

"You have healed many of us and you gave us strength and sent that snake back to the hell that spawned it, rest before you try this," Telenstil said to her.

"I will not let him die or the evil conquer him. I cannot serve the Saint and let that happen," she answered.
Posted by Jason Zavoda at 8:52 PM