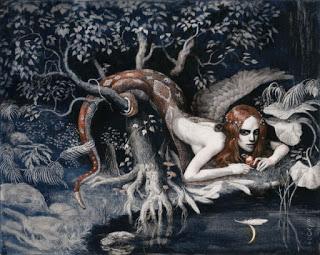 "She was not tall, but was formed with exquisite voluptuous purity of line and contour. Her eyes were of a dark sapphire blue, with molten depths into which the soul was fain to plunge as into the soft abysses of a summer ocean. The curve of her lips was enigmatic, a little mournful, and gravely tender as the lips of an antique Venus. Her hair, brownish rather than blond, fell over her neck and ears and forehead in delicious ripples confined by a plain fillet of silver. In her expression, there was a mixture of pride and voluptuousness, of regal imperiousness and feminine yielding. Her movements were all as effortlessness and graceful as those of a serpent."

"...if you could behold her as she really is, you would see, in lieu of her voluptuous body, the folds of a foul and monstrous serpent."

On the northern-eastern most edge of the Gnatsmarsh is a half-sunken portion of the Celadon Forest. It is filled with the rotting boles of trees with twisted roots like the long necks of giant serpents rising from the scum-covered water. The abbot of an ancient Pholtite monastery sends out a call for help (via messengers throughout the region and to others of his order). Men from the nearby town of Beetu have begun vanishing and now even some of his own monks have disappeared. One of the monks was bearing a minor relic which has allowed the abbot to divine its general location; in a wood of evil repute only a half-days march from the monastery. Within the wood are the ruins of a castle and it is within these ruins that the abbot believes the relic can be found, and perhaps the missing men.

The forest is home to bully wugs, giant ticks and toads, wolves and weasels, snakes and spiders, all of whom seem determined to keep the players from reaching the ruins. There is a deeply submerged path that shows signs of recent passage, the woods themselves are marshy and filled with quicksand, tangles and briars, making it rough and slow going.

The ruins are no more than overgrown rubble except for a wide cleared area near their center (once the great hall of the castle). At the center of this clearing is a well-like circular stair that descends into darkness. Around these stairs dance a strange group of men, bullywugs and satyrs. All are diseased, the satyrs and men with burning red eyes matted fur and hair and all with weeping sores. Most are at half their normal hit points. If come upon unawares they will be dancing wildly about the stairs, two of the saytrs  playing pipes. But it is hard to reach the center clearing without rousing another dozen of the bullywugs who rest among the thick growth and rubble. This rubble provides them with 3/4 cover and the ape-men will hoot, holler and throw stones (which are plentiful). If these bullywugs  are roused the saytrs and others will scatter among the stones and do their best to keep any from reaching the stairs. All have been charmed by Nycea and will fight to the death with a smile upon their lips.

At the bottom of the steps is a maze of passages and rooms, the walls wet and crusted and a thick smell of corruption and decay ever present. Within the corridors and rooms stalk a pair of Manticores and nest of wererats who laired here before the coming of Nycea and now hide from her minions.

Nycea herself lairs deep within the ruins near an primordial well that descends unto a dark lake in the Underoerth (an escape route for the ancient lamia). She is truly ancient, stronger with more hit dice and powers than a normal monster of her kind. She possesses several magical items, most notably an orb that allows her to scrye the surrounding land and use her powers to charm select males who will sneak away and come to her. Those so charmed bear the mark of Nycea visible only to others charmed by her, which allow them safe passage to her lair. Unfortunately Nycea is the carrier though not victim of a dread disease which she spreads to her more intimate minions. The disease causes 1d4 hit points of damage per day through fevers and weeping sores.

Nycea surrounds herself with charmed minions (all male) and snakes. Snakes, snakes, snakes, they adore Nycea and are drawn to her. snakes of all kinds surround and protect her.

The charmed monk with the relic (the fingerbone of a powerful cleric) wears this item about his neck in a lead cylinder. If opened it provides protection (10ft radius) to Nycea's charms and if she is struck in combat by this finger bone she will be dispelled in an explosion of light. The finger bone will disappear and reappear in the monastery.

While it is possible to defeat Nycea I like the idea of her as an illusive enemy that may haunt the players in future adventures.
Posted by Jason Zavoda at 3:09 PM