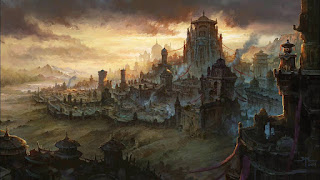 Clark Ashton Smith - Some Ideas and Descriptions from his Stories - 6a

If you have not read this story TURN BACK NOW! or risk losing forever the unspoiled appreciation of Clark Ashton Smith's prose.

"Somehow, Tomeron seemed never to belong to the present; but one could readily have imagined him as living in some bygone age. About him, there was nothing whatever of the lineaments of our own period; and he even went so far as to affect in his costume an approximation to the garments worn several centuries ago. His complexion was extremely pale and cadaverous, and he stooped heavily from poring over ancient tomes and no less ancient maps. He moved always with the slow, meditative pace of one who dwells  among far off reveries and memories; and he spoke often of people and events and ideas that have long since been forgotten."

"I cab readily recall, however, the studies to which Tomeron had devoted himself, the lost demonian volumes from Hyperborea and Mu and Atlantis with which his library shelves were heaped to the ceiling and the queer charts, not of any land that lies above the surface of the earth, on which he pored by perpetual candlelight."

"He maintained that life and death were not the fixed conditions that people commonly believed them to be; that the two realms were often intermingled in ways not readily discerned, and had penumbral borderlands; that the dead were not always the dead, nor the living the living, as such terms  are habitually understood."

"Carrying torches, we left the mansion of Tomeron and sought the ancient catacombs of Ptolemides, which lie beyond the walls and have long been disused, for there is now a fine necropolis in the very heart of the city. The moon had gone down beyond the desert that encroaches toward the catacombs; and we were forced to light our torches long before we came to the subterranean adits; for the rays of Mars and Jupiter in a sodden and funereal sky were not enough to illumine the perilous path we followed among mounds and fallen obelisks and broken graves. At length we discovered the dark and weed-choked entrance of the charnels; and here Tomeron led the way with a swiftness and surety of footing that bespoke long familiarity with the place."

"Entering, we found ourselves in a crumbling passage where the bones of dilapidated skeletons were scattered amid the rubble that had fallen from the sides and roof. A choking stench of stagnant air and of age-old corruption made me pause for a moment but Tomeron scarcely appeared to perceive it, for he strode onward, lifting his torch and beckoning me to follow. We traversed many vaults in which mouldy bones and verdigris-eaten sarcophagi were piled about the walls or strewn where desecrating thieves had left them in bygone years. The air was increasingly dank, chill and miasmal; and mephitic shadows crouched or swayed before our torches in every niche and corner. Also, as we went onward, the walls became more ruinous and the bones we saw on every hand were greener with the mould of time."

The city of Ptolemides was once a proud Pre-Imperium Suel City-State, but after the advent of the Imperium it was slowly abandoned and only a fraction of its population remained. It was home to an ancient temple of Lendor, perhaps the oldest Suel temple of the god's, and during the Rain of Colorless Fire this saved the city, in a manner.

A great storm surrounded the city during the Rain of Colorless fire and transported it between time. The people of Ptolemides who survived live their lives trapped between the beat of a heart. They do not die or age, they hunger little and lead a life of quiet dreaming. The farmland around the city survived even when most within the city did not and the crops are grown picked and grow again to be picked and consumed each day. Cattle bear young who grow to adulthood, are slaughtered and eaten, all as needed to fill the larders of the people, and generally all are unaware of this.

The city and its surroundings are a strange living scar in the outskirts of the Sea of Dust near to Slerotin's Passage. Those who enter the environs of the city become caught within the web of timelessness woven by Lendore. The only way out is the said to be deep under thre city in the Catacombs of Ptolemides.

Within the city only the sections near the outer gates and the central citadel are occupied, while entire quarters are abandoned and walled off, for Ptolemides is also a city of the dead.

When Lendore storm of time came it swallowed the city whole and only those within the citadel survived. These survivors were overwhelmed by the number of the dead, and in houses, manors, tenements and even the streets, the bodies were left unhallowed to putrefy and rot. But these unshriven spirits soon began to walk, to haunt the dead quarters of the city, and to prey upon the living.

Gates were shut, all entrances to these dead quarters walled off, closed and guarded. The priests of Lendore joined the city guard in a desperate attempt to drive back the dead. Then, more welcome than they have ever been, came the hidden cult of necromancers, and the greatest of these was Tomeron.

When Ptolemides was first settled, when the foundations stones were first set, these early Suel found the catacombs, and what they believed, perhaps rightly, was the entrance to the underworld, the land of the dead. These passages were old and endless, already filled with tombs and ancient bones and passages that went deep into the earth. For generations the bodies of the dead were placed reverently within vaults and mausoleums and niches cut into the walls. Over time the nearest of the passages were filled, and the tunnels were followed further and further while a slow sense of evil and darkness crept nearer, and the dead were no longer left undisturbed.

A great necropolis was built in the abandoned foreign quarter of the city and the catacombs of Ptolemides were sealed. The Rain of Colorless Fire and The Storm of Time came, and the dead walked, and then came the necromancers, and with them Tomeron.

Tomeron has unsealed the catacombs and from the abandoned manor where he now lives, in a dead quarter of the city, he directs others; magicians, thieves, priests, fighters, adventurers, fools, to do his bidding and search the catacombs. Of what is brought back to the surface Tomeron has his tithe, but always he seems disappointed, as if what he is truly looking for is never found.

NOTE: Here begins my conversion of TSRs 'Legendary' boxed set, the Ruins of Undermountain. I will just be using the maps for the most part (because my cartographic skill is so poor) but I've always loved this particular dungeon crawl and it will be a pleasure to convert for my Greyhawk campaign.

Tomeron, as I plan to use him, is a high level Necromancer.

Reaching Tomeron's manor is best done in daylight. What was once the artisan's quarter of Ptolemides is now a walled and guarded ruin. Only one gate into the quarter is left open, though rumors say that the Guild of Thieves knows of a secret way.

There are three gates and a wide circular tunnel that lead to this dead quarter. The outer gate within the fortress will first be opened and as the party approaches the 2nd gate, this outer gate will be closed. Then the 2nd gate will be opened and when the party reaches the gate to the dead quarter, that gate too will close. Finally this 3rd gate will open and the party will be allowed to enter what was once the Artisan's Quarter.

If anyone wants out there is a bell that can be struck near the gate and a basket will be lowered from the wall to collect the 20gp return fee. After dark the guards will ask for extra coin to allow escape from this quarter, and some will not respond at all, preferring to lock and bolt their doors rather than face what might be ringing the bell.

Once outside the small fortress a returning party will be lead to a counting house next door to the fort and there the tax will be levied.

Shops catering to adventurers have sprung up on the avenue leading to this gate and a large inn called 'The Dirge' sits on the far corner from the fortress. It is common for a last drink to be bought here before entering the gate and all manner or business is transacted within this tavern. Hirelings hired, rumors gathered, notices left and what-not.

The dead quarters of the city are very grim and dangerous places, and Tomeron's is no exception. Most buildings are in ruins and many are unpleasantly  occupied. rats, bats, vermin and spiders infest these buildings, as well as all manner and kind of undead. The main street is kept warded, at least during the day, but at night the undead roam and there is little shelter to be found.

Several necromancers do live within this quarter and far down its streets can be found an almost-palace that is their guild hall, but these buildings are guarded and sturdy and do not welcome visitors.

Tomeron, on the other hand, welcomes adventurers at anytime. His manor is in a large walled compound three blocks from the gate. The doors to his house are always open and lead to a large entrance hall. Tomeron himself will come to greet all those wishing to journey to the catacombs.

Inside this hall is a large staircase leading to a dimly lit upper floor, but the players will not be invited to see it more clearly. On its balustrade sits a pair of gargoyles, perhaps mere statues, but their unmoving features are grinning and malevolent. A half-dozen uniformed footmen are nearby, pale men with the stench of carrion about them, and the black beneath the stairs seems filled with something more awful than darkness.

To the left of the entrance-way is a set of double-doors. These open to a long, wide passage that turns and turns as it leads down, and finally comes to a broad square room. A quick estimates shows a ceiling vaulting out of site, and a room at least eighty feet wide as it is eighty feet long. Some tables and chairs are at the north end, at its center is a large round pit covered by an iron plate. Massive chains lead from the plate to four crank mechanisms spaced evenly around its sides.

"I take one coin in five and such items, jewels, gems and such-like as take my fancy. No more than one in three. If you agree and are prepared, that is your way to the catacombs," Tomeron points to the pit and the iron plate which covers it.

If the party agrees and wants to proceed Tomeron will speak a sharp command and four tall and heavily scared men will approach the cranks and begin raising the iron plate. Suspended by chains beneath the plate is a platform. Once the iron plate has reached the ceiling the platform will be even with the edge of the pit and a panel will be  extended to act as a bridge. Once the party is on the platform the panel will be removed and the platform lowered into the pit.

Tomeron  will call down to the party, "From here your adventure begins. Beat upon the armor of the dead to signal your return."
Posted by Jason Zavoda at 10:13 AM